News Regarding Fake Recruitment of Railway Recruitment Board 2020: A job advertisement notifying over 5,000 vacancies in Indian Railways is a fake one, the government’s fact check has confirmed. The Ministry of Railways has also confirmed that the job notification is not genuine. “Railways has initiated it’s the investigation and is going on to take the strictest action as per law against the above agency/persons involved in above matter,” it has said.


The fake notice has surfaced online when crores of candidates are waiting for the RRB NTPC and RRB group D exam dates on which the Ministry had said earlier that it will be released after an external exam conducting agency has been hired. Even the fake notice claims that it has been hired by the railways to conduct the recruitment. 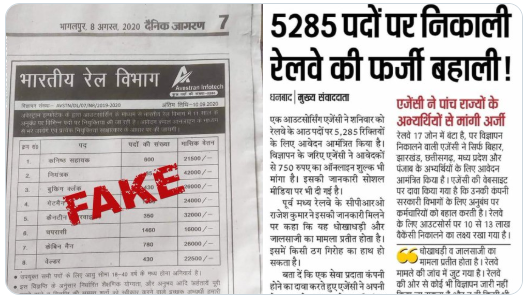 Clarification about an advertisement by a private agency in a newspaper regarding alleged recruitment in eight categories of posts on Indian Railways.

In connection to this, the Railway Ministry has said, “railways have not authorized any private agency as yet to do the recruitment of staff on its behalf as alleged by the above named agency.”


In the railways recruitment of various categories of Group ‘C’ and erstwhile Group ‘D’ posts is presently catered to by 21 Railway Recruitment Boards (RRBs) and 16 Railway Recruitment Cell (RRC) only and not by any other agency. Vacancies on Indian Railways are filled up by giving wide publicity through Centralized Employment Notifications (CENs).


On-line applications are called for from eligible candidates all over the country. CEN is published through Employment News or Rozgar Samachar and an indicative notice is given in National Daily and Local Newspapers. The CEN is also displayed on the official websites of RRBs or RRCs. The website address of all RRBs and RRCs is mentioned in the CEN.

The name of the organisation that has released the fake railway job notice “Avestran Infotech”.

Important: Please always Check and Confirm the above details with the official website and Advertisement / Notification.

Maru Gujarat is the No. 01 Educational Website where you will be able to find details about various Jobs in different categories, Results, Syllabus, Old Papers and much more.